How was Injabulo created?

We lived in South Africa for 3 years and whilst we were there we would often visit little markets.  We were always struck by the diverse range of hand crafted goods made by the people to give them an income.

When we came back to this country we decided that we would like to try and make a difference to a few lives by buying high quality handmade crafts and bringing them over to sell. Our original range included, candles, Zulu baskets, hand embroidered bedding

and hand painted tablecloths and wall hangings.  We sold at agricultural shows, craft fairs, and larger venues like Olympia, Ally Pally, NEC.  As time passed the range evolved and we added  hand made ceramic buttons and increased the basket range. The small business that had handmade paper that we sold turned their hand to making stitchmarkers for us.  ( That was a mission and a half and only resulted in success after taking knitting and showing them how a stitchmarker worked).  The project in Botswana that made paper beads for us also turned their hand to stitchmarkers. We soon concentrated on wool and fibre shows as creative people understand the work that goes into making something and we weren’t selling to a public who believed that everything should be “ cheap from China” Roger and I often laugh about those first shows that we did, going back nearly 20 years it was a very different game then.

Where did the name come from?

Injabulo is a Zulu word for happiness and we thought a fitting name for a business which was intended to bring happiness to the makers but also the purchasers!

How has starting Injabulo made a difference to peoples lives in Africa?

We have helped raise the profile of many small businesses which in turn has meant that the (mainly) women who make the goods have the money to feed their familes, educate them but probably more importantly give them dignity and a sense of worth.

We have also worked with a number of small projects which unfortunately have always been dependent on a leader to show them away and if the leader moves on then the project folds.  Established small basket making businesses have gone from strength to strength but the pandemic has had an adverse effect on many and we are finding it quite difficult to get goods out of Africa, everything is taking much longer.  Fortunately we have plenty of stock!

Running Injabulo has also meant that we have been able to support a children’s charity Pebbles Project.  Pebbles is based in the Cape Winelands and supports children born with Foetal Alcohol Syndrome.  We have successfully run three knitting appeals, when we have been inundated with hats, scarves, gloves, sweaters and blankets which have kept the children warm in the cold Cape winters.  We have also sponsored a number of children over the years, sponsorship which has paid for their schooling. 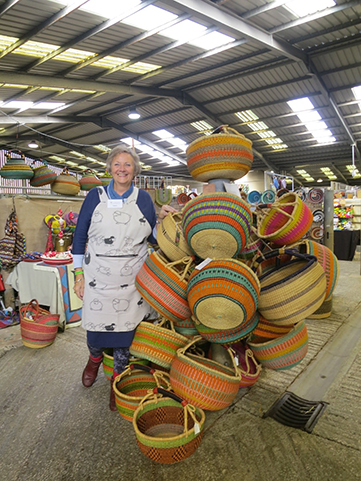 hich is the most popular basket?

At shows, without doubt the round Bolga basket is the most popular.  However online we find that the different ranges of bowls and the lovely African animals made for us by Denis in Rwanda are extremely popular.

How many baskets have you in your house?!

I’ve never counted but there are baskets in every room.  Some are on the walls for decoration, I’ve got baskets with projects in, baskets with loo rolls in the bathrooms, baskets for bread, baskets with fruit in.  I just use baskets all the time.  Every one is different and I know lovingly made.  Some have a cultural connection, some have patterns interwoven which have a meaning, some have history.  I’ve got baskets that I’ve picked up in antique shops and charity shops.  My very favourite basket is my shopping basket.  I take it everywhere with me and although I’ve been using it for about 5/6 years now it still looks good.

We’ve been trading nearly twenty years and have seen so many changes. We have worked really hard and at times it has been a struggle but we believed in what we were doing and have loved it all.  We have met so many lovely people and what characters we’ve come across along the way!  We’ve travelled the length and breadth of UK and trips across the Irish Sea to Dublin always brought a barrel of laughs.  The Fibre events have been the crowning glory.  Roger’s illness has meant that we shall no longer do the shows, but we are continuing to trade online and hopefully next year they will be up and running again and we’ll be able to attend as visitors!

The following terms and conditions apply to the Yarndale Gift Card:

1.    Gift cards can be redeemed on our website www.yarndale.co.uk for products within the Yarndale Shop.   2.    Gift cards cannot be used for Yarndale Ticket purchases. 3.    Gift cards are not valid against the purchase of more gift cards. 4.    Gift cards can be used as part payment for a transaction with the balance being paid by another accepted method. 6.    If any product purchased with a gift card is subsequently exchanged for a product of lower price or a refund, any money owing will be issued as a gift card. 7.    Gift cards cannot be exchanged for cash. 8.    The gift card is not a cheque guarantee, credit, debit or charge card. 9.    Your gift card will either expire 12 months after the date of issue or 12 months from the last transaction (which ever comes later). A transaction is a sale or a top up.  Any remaining balance is cancelled on expiry. We reserve the right to amend terms and conditions of our gift cards at any time and take appropriate action, including cancellation of a card, if necessary, in return for an appropriate refund. 10.    Nothing in these terms affect your rights at law (for instance, under the Consumer Rights Act 2015).  Please see the Citizens Advice website at citizensadvice.org.uk for more details.
Copyright 2022 ©Yarndale Merchandising Ltd | Reg company no: 9500417
Registered address: Hawkswick Cote Farm Hawkswick Skipton BD23 5PX | Design by Creative Badger Photography by Peter Fort, Malcom Stoney & Sam Carlin